HE WAITS FOR US

We have a guest at one of our cabins with the cutest floppy-eared pup you can imagine.  Little Flip has the energy of a dozen bloodhounds and is just as inquisitive.  I see Flip  waiting at the cabin for his master. Once he sees him, that tail wags faster than a speeding bullet as he jumps around in glee. Flip is eager for his master to come home. I’ve seen this scenario play out day in and day out. It dawned on me this week that’s just how God eagerly awaits us.

In the parable of the prodigal son (Luke 15:11-32), we see a wayward child ask for his inheritance, receive it, and literally throw it away.  I can relate to the prodigal, for sure. But if you think about it, this parable could be called “The Parable of the Prodigal Father.” We may think that “prodigal” refers to sinful, rebellious, or wayward behavior. But it actually means “wasteful in a reckless way; extremely generous, lavish.” The term may describe the rebellious son’s wild living, but it also describes the father’s lavish love. This parable is about our heavenly father’s character and how his generous love operates in a world full of wayward children.

Throughout the parable, the father’s response is totally unexpected. He honors the outrageous request of the younger son and gives him his inheritance. The father’s love is so recklessly generous that it allows for rebellion. And later, instead of rejecting the son who rejected him, the prodigal father watches and waits day in and day out for his son’s eventual return. And when the son finally returns home, the father showers him with gifts and a banquet.

Jesus shared this parable to let us know without a doubt that his Father’s love is abundantly prodigal, and that when we repent and return home, our Father, with all of heaven, is ready to celebrate!

If you’re a prodigal, which we all are at some point due to our sinful nature, be grateful for the unconditional love and forgiveness that will greet you when you come back home. No matter how close you currently are to God, rest assured that he loves you with pure love that’s greater than we can even comprehend. When you fall, he’ll be there to catch you. When you stray (and you probably will), he welcomes you back. His love for you is independent of any other relationship he has. You are all his!

Have you experienced the Father’s lavish love in your life?

Learn more about Cary John Efurd Ministries by liking our ministry Facebook page and downloading our FREE mobile app from App Store or Google Play. Once downloaded, allow notifications to keep you up to date on what’s happening. 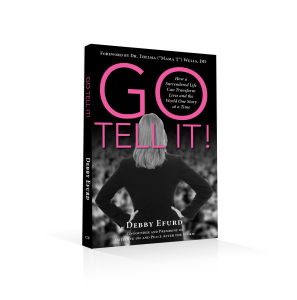